The small specks or “bugs” that many people see moving in their field of vision are called floaters. They are frequently visible when looking at a plain background such as a blank wall or blue sky. Floaters were described long ago, in Roman times, as flying flies (“muscae volitantes”).

Floaters are small clumps of cells or tissue that form in the vitreous gel, the clear jelly-like fluid that fills the inside cavity of the eye. Although they appear to be in front of the eye, they are actually floating in the fluid inside the eye and are seen as shadows cast on the retina (the light-sensing inner layer of the eye). 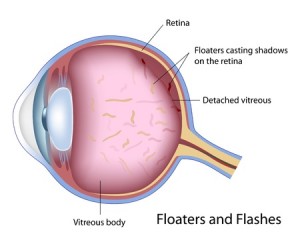 The appearance of floaters, whether in the form of little dots, circles, lines, or cobwebs, may cause much concern, especially if they develop suddenly; however, they are usually of little importance, representing an aging process. The vitreous gel liquefies and shrinks with time, ultimately pulling away from the retina and causing floaters. This is especially common in near-sighted people or after a cataract operation.

Usually, they are not serious, but there are exceptions. As the vitreous gel pulls away, the retina may be torn, sometimes causing a small amount of bleeding in the eye which may appear as a group of new floaters. Tears in the retina are potentially serious because they can lead to retinal detachment and visual loss.

Uncommonly, floaters result from inflammation within the eye or from crystal-like deposits which form in the vitreous gel.

Without examination by an ophthalmologist, there is no way for a person to determine whether floaters are serious. Any sudden onset of many new floaters and flashes of light should be evaluated promptly by your doctor.

What Can Be Done About Floaters?

Floaters may sometimes interfere with clear vision, often when reading, and can be quite annoying. If a floater appears directly in your line of vision, the best thing to do is move your eye around, which will cause the inside fluid to swirl and allow the floater to move out of the way. We are most accustomed to moving our eyes back and forth, but looking up and down will cause different currents within the eye and may be more effective in getting the floaters out of the way. Often, floaters will break up or shift to the side with time, making them less noticeable or bothersome.

If you have additional questions or concerns, please ask the doctor or a member of our staff.